All praise is due to Allah, and may peace and blessings be upon His Messenger!

Trump's Accession to the US presidency came as a new experience based on terrorizing all parties at the same time in order to get the largest share of benefit in all dealings and on all fronts!

From this standpoint, Israel got high and showed the Jewish bad manners throughout history, about which Allah (SWT) told in the Quran, " And We conveyed to the Children of Israel in the Scripture that, "You will surely cause corruption on the earth twice, and you will surely reach [a degree of] great haughtiness." (17: 4).

The duo "Trump and Netanyahu" have become openly proud of flouting the UN resolutions, of the relentless pursuit of imposing a new fait accompli in "Jerusalem" by endorsing Congress's decision to move the US Embassy to Jerusalem after years of procrastination by American presidents, and then of the starting of the practical implementation of this decision in spite of the UN objection to it by an overwhelming majority!

It is now time for the Arabs to wake up from the delusion that the satisfaction of "Trump" by them at the expense of the Islamic nation's identity and its issues would get him side with the Arabs against Iran let alone siding with them against Israel.

Iran will continue enjoying America's threatening of the Arabs with itself, while America is tearing the Muslim world with the help of Iran sometimes, and Israel is reaping, from all of this, more gains on the ground!

Out of all these political calculations, the Palestinian people came to declare that its land is not possessed by "Netanyahu" or "Trump," but it is the right of a people which resisted, struggled and endured an ordeal for seventy years. And there the people came out protesting against the starting of the practical implementation of the American embassy move into "Jerusalem", yet the occupation forces confronted them with brutal terrorism which resulted in the fall of about fifty-five murdered, may Allah accept them as martyrs, not to speak of the thousands of those who had been wounded!

This blood, which had been shed, strikes a warning bell for all Arab and Islamic governments and organizations to wake up, rise up and confront this Zionist terrorism by all available means.

And if the Islamic countries are unable to declare jihad, then there is nothing less than supporting the Jihad of the Palestinian people, which is a fighting-back-jihad which is stated in the holy Quran: "Permission [to fight] has been given to those who are being fought, because they were wronged. And indeed, Allah is competent to give them victory." (Ch. 22: V. 39), which is, by international standards, the right of self-defense which is guaranteed by the international covenants.

Therefore, the channels of fundraising have to be opened, and donations have to be delivered to all factions of the Palestinian people, so that all Muslims around the world contribute through such channels, supporting their brethren in Palestine. In parallel with this, Muslims have to do their best in the prayers, especially as we are at the beginning of Ramadan, the month of fasting, as the prayers of the one who is fasting are answered, as the Messenger of Allah (may Allah's peace and blessings be upon him) clarified, and as Allah said in the Quran: "And when My servants ask you, [O Muhammad], concerning Me - indeed I am near. I respond to the invocation of the supplicant when he calls upon Me. So let them respond to Me [by obedience] and believe in Me that they may be [rightly] guided." (Ch. 2: V. 186).

Indeed, the cause of the enemy's plotting only makes us more confident in our religion because Allah clarified this point in the Quran, He said, "And never will the Jews or the Christians approve of you until you follow their religion." (Ch. 2: V. 120), and the prophet (may Allah's peace and blessings be upon him) told us about such alliances, he said "The peoples will soon summon one another to attack you as people when eating invite others to share their dish." (Reported by Ahmed and Abou-Dawood, and Authenticated by Imam Albany).

Alongside of the news of this ordeal, the Quranic guidelines and the prophetic sermons had explained how to overcome it, as Allah said, "Allah has promised those who have believed among you and done righteous deeds that He will surely grant them succession [to authority] upon the earth just as He granted it to those before them and that He will surely establish for them [therein] their religion which He has preferred for them and that He will surely substitute for them, after their fear, security, [for] they worship Me, not associating anything with Me. But whoever disbelieves after that - then those are the defiantly disobedient." (Ch. 24: V. 55).

This verse shows us the way and promises those who take it that Allah will give them the power, and the prophet (may Allah's peace and blessings be upon him) gave the good tidings that this will happen, Allah's willing, even after the debacle crisis, as he said, "Allah drew the ends of the world near one another for my sake. And I have seen its eastern and western ends. And the dominion of my Ummah would reach those ends which have been drawn near me…" (Reported by Imam Muslim).

And no one should ask himself: will he reach those moments or not?!

But rather, one should ask himself: has he contributed to the development of the nation on this road by saying and doing?! Or have his sayings and doings just been a stumbling block in this way?!

May Allah, glorified is He, use us in supporting His religion, grant our Palestinian brothers perseverance and resilience, grant them victory over their enemy and return Al-Aqsa Mosque back to the Muslims.

The Salafist Call in Egypt 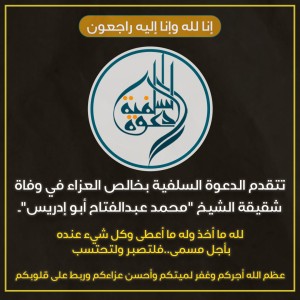 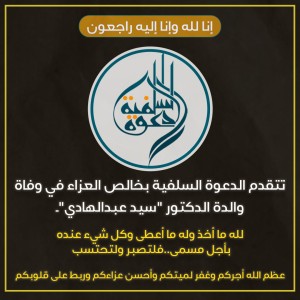 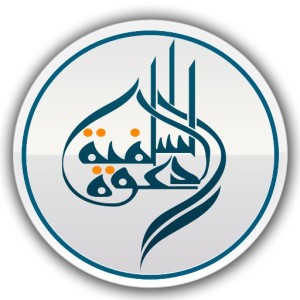